Phish has three distinct periods—1.0 which is from their inception in the 80s to their first hiatus in 2000, 2.0 which is from 2002-2004 and then 3.0 which is when they got the band back together in 2009 to present day. Many consider the second set Tweezer that they played in Stateline, NV to be the apex of Phish 3.0.

The “Tahoe “Tweezer” stands out in a sea of other amazing Phish jams because of it’s sheer size (at 37 minutes it’s the 7th longest Phish jam of all time), audience participation and improvisational energy. In a 37-minute extended jam there are bound to be weak points or periods where the band is searching for their next direction. Not with Tahoe Tweezer. No, sir.

There has been plenty written about “Tahoe Tweezer” and I don’t want to even take a stab at doing a better review.

Here is an excerpt of the first hand account from Mr. Miner posted in the wee-hours of the morning after the show back in 2013.

After the first half of “Tweezer”—one of the more evil jams I have ever heard—wrapped up somewhere around the half way point, I took a bow, thanking the band for what they had given us, and thanking powers that be for allowing me to have been present for such a ceremony. But little did I know, things were just getting turnt up! Sitting in a sort of musical purgatory between the Hades-laced soundtrack we had just heard and the heavenly passages that awaited, the guys chilled out with no sense of unease or urgency to get anywhere at all. And that is the sign of a band that believes in itself and trusts that the music will take it where it needs to go. That is a band that has let go of their egos and bought into each other hook, line and sinker—forever. Pun intended.

When the band—on a dime and all at once—made a change for the skies above, nothing in the universe could hold them back. Playing the most inspiring music that we have ever heard, soon the crowd got involved, elevating the experience to a whole ‘nother level. As the band hit a break in the mind-bending jam, the crowd let out a “Wooooo!” The guys immediately picked up on this, altering the jam in order to create breaks for the crowd to respond—and the rest is history. The interplay between the band and audience reached a level unseen before, driving each other higher and higher into a cosmic and communal bliss. After a set of “Woos!” the band would tear into music so cathartic and inspirational that it will make you cry. This is IT like IT has never manifested ITself at a Phish show before. This was a whole new level for this psychedelic mind game called Phish. This was life like we’ve never experienced it before. Or was it a dream?

Yea – this is a must listen.

Thanks to YouTube user madpicken, we now have fabulous 4-cam footage to accompany the monster jam! 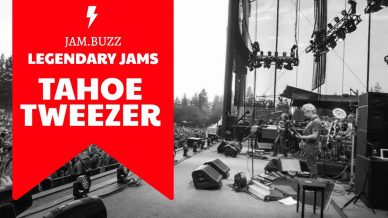