As we have been witness to, Dead and Company has played a nearly exhaustive repertoire of Dead tunes including some of the classic covers they loved to play during their 30 year history. What we really haven’t seen is the hard work necessary to bring the heat every night of the tour.

This 48 minutes of rehearsal footage captures John, Bob, Oteil, Jeff, Bill and Mickey working out the kinks of Easy Wind before the debuted it in Portland last week. It’s a treat to see the inner-workings of a rehearsal and the fine-tuning they do to the classic Pigpen tune.

At one point during the rehearsal, you see Mayer listen to a recording of Pigpen singing Easy Wind to see how he did it. During another break in-between playing, Oteil reveals that he’s playing an Allman Brothers baseline under the song. If you’re a music geek like me, you’ll appreciate these little moments during the footage.

Check out the debut of Easy Wind in Portland.

Fun facts about Easy Wind: it’s one of two songs that the Dead recorded that have both lyrics and music written by Robert Hunter. The Dead debuted the tune live on August 20, 1969 and played it a total of 45 times with the last coming on April 4, 1971. 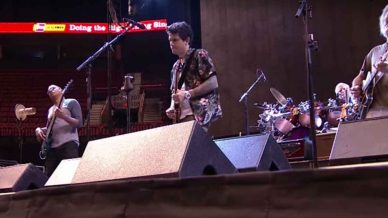