Bluegrass all-stars, Infamous Stringdusters pulled out all the stops for their show in Philly last week. The marathon setlist included some new tunes off their just released album Laws of Gravity, some Phish teases and a whole lotta Dead. At one point the band says that “this is our last show for a little bit and we’re excited to blow it all out.” It was a blowout indeed.

The Stringdusters got things started with a thumping version of “Deep Ellum Blues.” Later in the set, they cover “Scarlet Begonias” and then treat Philly to “Not Fadeaway” to close the second set. As if they couldn’t help themselves, they encored “Goin’ Down the Road Feelin’ Bad.” If you haven’t heard Dead-grass, this is a great introduction.

Thanks to Jamie Burks for the excellent recording! 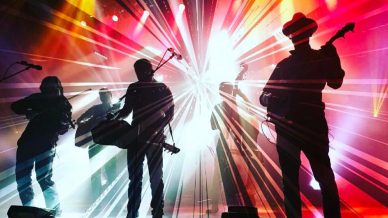 Jam Date: January 28, 2017
Featuring: Brothers Comatose, Infamous Stringdusters
Venue: World Cafe Live
Songs: Bathtub Gin, Blackrock, Deep Ellum Blues, Devil in Disguise, Echoes of Goodbye, First Tube, For What It's Worth, Freedom, Get It While You Can, Going Down the Road Feeling Bad, Gravity, Highwayman, Hit Parade, Home of the Red Fox, If I Had a Hammer, Let It Go, Let Me Know, Maxwell, Mountain Town, Not Fade Away, One More Bridge, Peace of Mind, Scarlet Begonias, Seventeen Cents, Soul Searching, Terrapin Station, The Place I Call Home, This Old Building
Hey-I got something to say!