In addition to the countless soundboards that are circulating of the Dead, plenty of Jerry Garcia boards are out there as well. It’s rare a day that an uncirculated Dead, let alone a Jerry Garcia Band soundboard surfaces.

An anonymous source recently uploaded an uncirculated soundboard recording of a 1973 Jerry Garcia and Merl Saunders show to bt.etree.org. The show also features John Kahn on bass and Grateful Dead member Bill Kreutzmann on drums. The show setlist reads as a classic Jerry and Merl show with some of the standard JGB tunes from that era including “One Kind Favor,” “After Midnight,” and “I Second that Emotion” among others. A couple of the songs have been omitted from the soundboard recording, but the recently surfaced board represents an upgrade over other circulating sources from the show.

Notes:
– this version has been provided by an anonymous source
– this show has never circulated in soundboard quality before
– level adjustments have been made
– several pops and clicks have been removed
– 60Hz hum has been reduced between all songs
– ‘train to cry’ and ‘all right mama’ fade in, ‘harder they come’ cuts at reel end
– the reel change between ‘after midnight’ and ‘dixie down’ has been crossfaded
– all files are tagged

Thanks to nognuisagoodgnu for the stream! 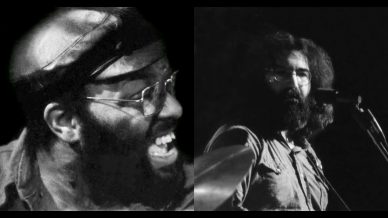 Jam Date: September 6, 1973
Featuring: Bill Kreutzmann, Jerry Garcia, Jerry Garcia Band, John Kahn, Merl Saunders
Venue: Capitol Theater
Songs: After Midnight, Expressway To Your Heart, Finders Keepers, I Second That Emotion, It Takes a Lot to Laugh It Takes a Train to Cry, It's No Use, It's Too Late, Like a Road, My Funny Valentine, One Kind Favor, That's All Right Mama, The Harder They Come, The Night They Drove Old Dixie Down
Hey-I got something to say!