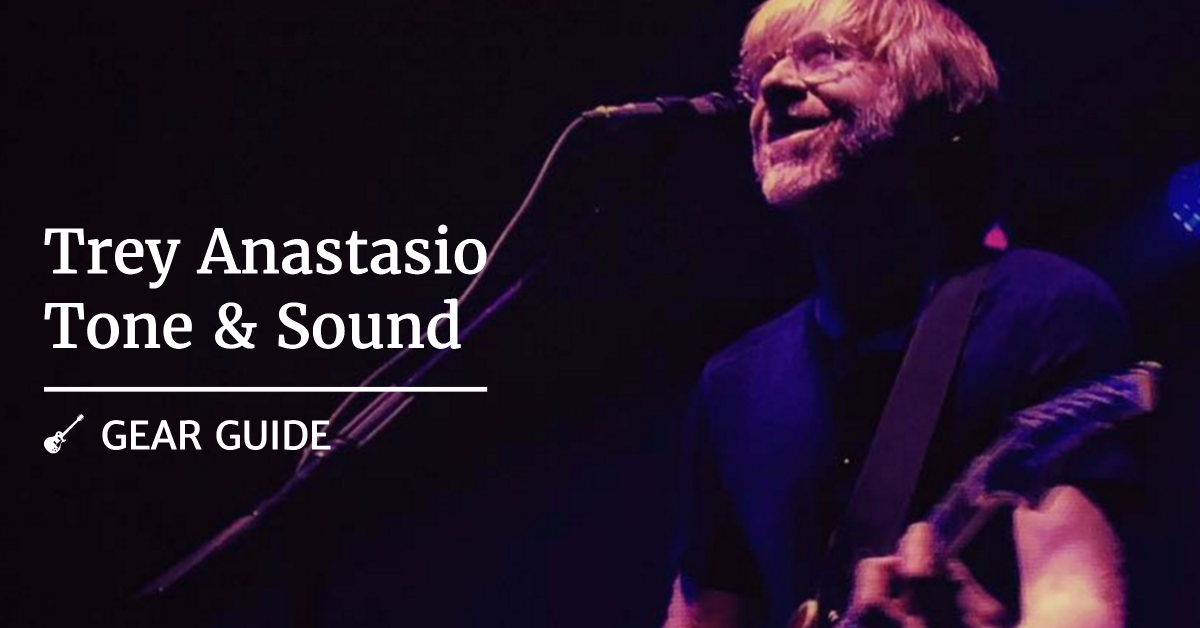 Trey Anastasio is one of the most enduring and beloved guitarists to emerge from the jam scene. Phish – whom Anastasio co-founded in 1983 – are renowned for their lengthy jams, joyful grooves and a telepathic improvisation. The band has secured a devoted following, in no small part due to Anastasio’s composition, vocal and guitar chops.

Anastasio has also carved out an impressive solo career since the mid 90s – his latest release Paper Wheels (2015) is stellar – and since the turn of the century has become increasing involved in composing and performing with notable symphony orchestras, including the New York Philharmonic and Boston Symphony.

Throw in guest spots with The Grateful Dead, Phil Lesh, Dave Matthews and a slew of side projects and it becomes clear that Anastasio is a musician with a remarkable drive to play and create.

Anastasio’s guitar style draws on the usual suspects: Hendrix, Clapton and Page, whilst jazz and prog players like Metheny, McClaughlin and Fripp were also a great inspiration. Jerry Garcia, not surprisingly, has been cited as a ‘huge influence’.

Anastasio is an avid tone tweaker, whose rig contains a combination of essential elements and peripheral items which are often changing from tour to tour. Let’s take a look.

Anastasio has been playing Paul Languedoc guitars almost exclusively since 1987. Languedoc was Phish’s live sound engineer for years and even built Anastasio some speaker cabinets.

The Languedocs are as functional as they are beautiful, a convergence of influences and approaches – not unlike the music Anastasio creates with them. Features include a 25 ½ inch scale length for Strat-like snap over the 24 frets, a set neck and hollow body construction for warmth and fat tone, twin humbuckers with splits and series switching options and a wooden bridge paired with a floating tailpiece. The instruments are a remarkable mix of classic yet disparate design concepts. It’s been argued that Languedocs are a frankenstein of Fender Starcasters, traditional jazz-boxes and Gibson Les Pauls. Whilst those elements are present, these guitars really have their own character.

Anastasio is clearly enamoured with Languedoc’s work and has even gone at length in concerts to describe the origins of these instruments.

Anastasio’s first Languedoc, dubbed ‘old reliable’ or ‘blonde no.1’ was built in 1987 and, unlike later models, includes a single coil pickup in the middle position.

Other Languedoc guitars have subsequently been added to the fold including three models built from Koa, one spruce top finished in sunburst and two more flame maple guitars. All have similar appointments to the original with subtle changes to the binding and inlays. Note the headstock shape, which inspired by Languedoc’s home state of Vermont.

A bonus of the hollow design is that notes can easily coaxed into singing feedback. Check out how Anastasio masterfully conjures this during a live version of ‘Chalk Dust Torture’. Note that he is constantly manipulating the guitar’s volume pot to both find the feedback sweet spot, and to prevent the guitar from uncontrollable howling.

Languedoc is still producing guitars by hand – priced between $7,500-$10,000 – although at the time of writing is not taking new orders. Used models get snapped up very quickly if spotted on reverb.com or eBay.

There are numerous reproductions of Languedoc’s designs in circulation, however these do not appear to be licensed. When asked if he was aware that his guitars were being copied, Languedoc stated “Yes, and they all suck”.

Anastasio has been seldom seen with other electric guitars. A notable exception to this has been his use of a red Fender Jaguar on the solo album, ‘Traveller’, released in 2012.

When Anastasio plays acoustics, they are likely to be Martins. He was honoured by the company in 2005 with a signature model, the Trey Anastasio Martin DCE. The striking dreadnought featured Koa in the back and on the headstock in conjunction with more traditional rosewood and spruce construction. Other unique appointments included different inlays for each position marker on the ebony fretboard and a Venetian style cutaway. Only 141 of these limited edition instruments were made and they rarely last long on the second hand market.
Anastasio with his namesake signature Martin acoustic.

In recent times, Anastasio has been spotted playing vintage Martin dreadnoughts: a 1943 D28 in sunburst finish and a natural 1969 D35.

After road testing a variety of footstools for seated performances (Anastasio sometimes holds the guitar in classical style position, on a raised left knee) an empty oatmeal tin was co-opted for this purpose.

For much of his career Anastasio played through Mesa Boogie Mark III 100 watt heads. He has also incorporated Marshall, Bogner and Fender amps into his arsenal.

However, his current go-to amp for Phish and Trey Anastasio Band shows is the Komet 60, a 60 watt head powered by EL34 tubes. After initial experimentation with two Komet heads (one powered by 6L6 tubes, one by the EL34s) Anastasio settled on a single EL34 equipped Komet, keeping the other as a back up.

For Symphony Orchestra shows, Anastasio currently plays through a Fender Princeton Reverb, although he has also used low wattage Michael Swart combos for such performances.

In fully blown Phish or TAB mode, Anastasio’s effects rig is a sprawling mass of pedals, controllers, racks and cables. Despite this appearance, the goals of pure organic tones and easy live access is paramount.


A duo of Ibanez Tubescreamers are employed for gain – sometimes a pair of TS9s, sometimes an 808 and a TS9. One is set with low drive, dubbed ‘less’ and the second – ‘more’ – at “full scream”. For extended solos Anastasio will typically start on the lower gain pedal and switch to (or add) the second for rich, singing sustain. Check out this live version of “You Enjoy Myself” – complete with synchronised mini tramp choreography! – for an example.

Another key to Anastasio’s tone recipe is the use of a Ross vintage compressor. Stories around this pedal have become folklore. Considered by some essential to early Phish tone, Anastasio had stopped using the pedal and subsequently lost it during the band’s ‘2.0’ period (around 2003-04). Some concerned fans known as ‘People for a Compressed Trey’ banded together to buy Anastasio a Ross clone leading up to Phish’s 2009 reunion – the beginning of Phish 3.0.

Moved by the generosity, Anastasio wrote:

“Dear People for a Compressed Trey,

Thank you! I can’t wait to try it out. As a matter of fact, I’d drive it over to the practise room now to plug it in right now, but I can’t seem to find my vintage Maserati! Hmmm….Trey”.

As recently as mid 2017, the pedal has been in and out of Anastasio’s rig. One theory for it’s lack of of use is that the lower watt Komet amps (60 watts as opposed to the Mesa Boogie Mk III’s 100 watts) are able to driven harder on stage, resulting in a natural power amp compression.

Anastasio explains that listening to Jimi Hendrix’s Band of Gypsies “for about eight million hours” instilled a love for the Univibe. Check out Anastasio kick it in during this recent TAB performance:

Anastasio is a skilled proponent of the Digitech Whammy pedal – preferring the V2 model over newer iterations. Although the pedal is capable of arcade game octave swoops, Anastasio prefers to use it more like a traditional vibrato bridge, fashioning semitone and tone bends.


Another mainstay of the rig is the Boomerang Phrase Sampler (looper). Again, Anastasio prefers an older model, rather than the current model III.

In this video – following the release of the ‘Traveller’ solo album, Anastasio crafts a beautiful improvisation using the Boomerang, Whammy Pedal, delays and a Fender Jaguar.

Anastasio getting trippy with delay and wah.

Anastasio uses a CAE routing and switching system that essentially removes any effects from the signal chain when not being used. In addition to this sonic benefit, this system also means that all pedals (except expression style wah and volume pedals) can be mounted in the rack and off the floor. 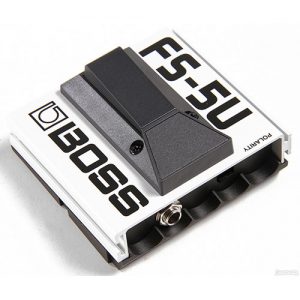 The CAE floor controller selects which effects are in the chain at any given time. MIDI foot controllers are used to access parameters within the Moog and Eventide units. Finally, half a dozen Boss FS-5 pedals are used for various tap tempo, Boomerang, Leslie and Ambikab settings.

When Anastasio plays solo acoustic shows or orchestral dates he will utilise a stripped down pedal board.

For electric, the pair of Tube Screamers are always included and is complimented by others staples at times such as the Whammy, Ross clone compressor and Univibe.

The solo acoustic rig is regularly complemented by the Boomerang, Whammy and Victoria reverb unit.