Phil Lesh and Friends’ set at LOCKN’ could more accurately be described as Phil Lesh and Everyone. Phil was joined by nearly a dozen musicians for his set and they were some pretty heavy hitters. Phil and Friends lineup featured members from Phish, The Infamous Stringdusters, Anders Osborne, Joe Russo and a special appearance from Derek Trucks and Susan Tedeschi.

Here was Phil’s full lineup for the evening:

While it’s cool to see so many top-notch musicians sharing the stage singing Dead songs, the songs were a bit muddy at times. It was still a blast none-the-less.

Check out Phil and Friends’ playing Uncle John’s Band thanks to great fan footage from iccuspunk.

# With Susan Tedeschi and Derek Trucks 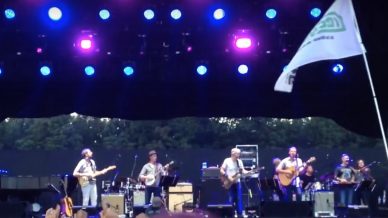