If you missed the show, luckily for us, Brooklyn Bowl livestreamed the show in full HD! The concert was livestreamed for free, but donations were being collected for Rock and Wrap It Up, a non-profit with the mission of helping feed people instead of landfills. They have served over 1,000,000 meals to those in need.

We have been used to hearing Jeff Chimenti deeper in the mix with Dead and Company, but last night Jeff was turned all away up and blew away the Bowl.

The super-group rocked Brooklyn with classic Dead tunes like “Bertha,” “He’s Gone, “Scarlet Begonias” > “Fire on the Mountain” and many more.

Thanks again to the Brooklyn Bowl for hooking us up with the free stream! 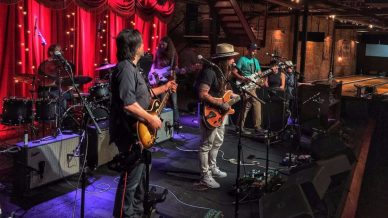