11/3/2016 Update: A recording recently surfaced of the entire MuleOWeen show, including the Traffic tribute set in it’s entirety. Thanks to kindms for the great recording! Here is the complete setlist below.

Gov’t Mule kicked off their annual Halloween celebration dubbed “MuleOWeen” a couple of nights early last night in Albany. As they have in years in the past, the Mule has paid tribute to one of their musical heroes. This year Traffic was in line to get the MuleOWeen treatment.

After a great set of classic Mule material and covers (see St. Stephen and World Boss > Mother Earth below), Warren welcomed Steve Elson & Bobby Allende to the stage for the second set to help out with the Traffic set. In all, Mule along with the help from Elson and Allende, knocked out 14 Traffic covers including eight Gov’t Mule debuts!

Thanks to Sean Roche you can check out footage of the highlights from the Traffic set including: 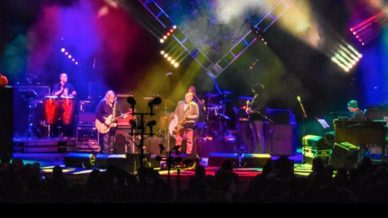