While Gov’t Mule didn’t play at The Peach Music Festival this year, Warren Haynes definitely did. In addition to playing lead guitar with Phil Lesh and Friends for two sets, Warren also teamed up with an old friend for an intimate set earlier on Sunday,

Grace Potter and Warren Haynes , who have collaborated a lot over the years, teamed up for an hour and half set on The Peach Stage. Warren played guitar and sang and Grace alternated between the keys and guitar and leant her powerhouse vocals as well.

Grace and Warren did a couple of originals from their respective catalogues (Grace Potter and the Nocturnals and Gov’t Mule), the duo jammed on some pretty epic covers. The highlight of the set was Grace crushing the Plant’s vocals on Led Zeppelin’s “Babe I’m Going to Leave You.”

Warren and Grace welcomed Captain Ron Holloway on the saxophone to closeout the set with a cover of the Allman Brothers Band’s “Soulshine.”

Thanks to nugs.net for the stream! 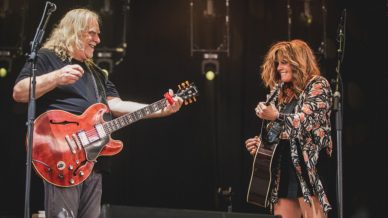 Jam Date: July 28, 2019
Featuring: Grace Potter, Ron Holloway, Warren Haynes
Venue: Peach Festival
Songs: Babe I'm Gonna Leave You, Find the Cost of Freedom, Gold Dust Woman, I Shall Be Released, I'd Rather Go Blind, Is It Me or You, Scared to Live, Shout It Out, Soulshine, Stars
Hey-I got something to say!