The Allman Brothers Band played their last gig in NYC at the Beacon Theatre on October 28th, 2014. While it’s only been a little over five years, so much has happened in the Allman Brothers community. Gregg and Butch have passed, Derek and Susan have been spreading their own brand of southern rock, Warren has continued to earn his moniker as the hardest working man in rock and Oteil has found a new calling with Dead and Company. One of the most exciting projects to happen in recent years are sons of Duane Allman and Dickey Betts (Devon Allman and Duane Betts) joining forces for a new era of Allman Brothers-inspired music and tours.

While so much has flourished from the ashes of the Allman Brothers Band, nothing really quite replaces the real thing. While both Gregg and Duane have passed and Dickey has opted out, the remaining members of Allman Brothers Band reunited last night in NYC to celebrate the 50th anniversary of the band.

Despite the fear and spread of COVID-19, tens of thousands of fans made the pilgrimage to NYC to see ABB reunite for one evening. Instead of peakin’ at the Beacon, the Brothers decided to put on a huge celebration at Madison Square Garden.

While variations of the Brothers line-up have played over the years, the core hasn’t come together since the final ABB show back in 2014. Never the less, it didn’t take long for Warren, Derek, Oteil, Jaimoe and the rest of the Brothers to find their groove.

The evening was a sight to behold. Allman Brothers Band members and family, new and old jammed deep into the evening at MSG on the best of the best of the ABB catalogue. The Brothers treated fans to nearly 30 songs during the two sets and encore.

Let’s hope we don’t have to wait another 5 years for another night of the Brothers summoning the spirit of ABB.

Thanks to Z-Man for the recording. 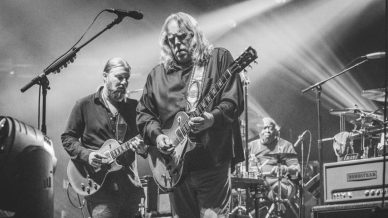