Dead and Company’s summer tour officially came to a close a couple of nights ago in Boulder. Weir, Mayer and the boys finished their third summer tour and it’s safe to say that the band is playing and jamming tighter than ever.

Who actually knows if there is any method Dead & Co (or any Grateful Dead family band) uses for creating a setlist, but it seems a few rules may have been broken at the second night in Boulder.

The first set started off with a rare “China Cat Sunflower > I Know You Rider” opener and included a set closing “One More Saturday Night” that is usually reserved for the encore spot.

Mayer and Co kicked off the second set with a monster “Scarlet Begonias > Franklin’s Tower > Fire on the Mountain” and continued to play nothing but gold the rest of the show. Another highlight was an impromptu “Days Between” that replaced a crossed off “Wharf Rat.”

Weir and the rest of the crew came out for not one, but two encores. First came “Uncle John’s Band” with a lengthy jam and then Dead & Co treated Boulder to “Ripple” for a rare second encore.

While the summer tour is over, Dead and Company will return to the stage one more time this year at LOCKN’ with renowned saxophonist Branford Marsalis.

Thanks to Lucas Lorenz for the recording!

Dead and Company’s summer tour has made it out West and it has been a glorious leg of the tour. After an amazing show at The Gorge, Dead & Co set up shop at Autzen Stadium for what Oteil described as one of the best shows of the tour:

“Confession: I previously thought my favorite place to play with @deadandcompany was Alpine Valley. I had always heard about how great those #gratefuldead shows were. But last night in Eugene, OR was something different.

It was like some kind of GD nerve center. Like the “Old Growth Forest” of Deadheads. I’m not sure how to describe it but it was a new high for me and it revealed an even deeper level of the love this particular fanbase has to offer.

And I say this having just had another transcendent night at The Gorge so you know it must have been SERIOUS at Autzen Stadium last night.”

The second set in Eugene was surreal. The “Dark Star,” the second appearance of “The Eleven” and “Morning Dew” are all worth a listen. Scratch that—the whole show is worth a listen.

Thanks to John Hermsen for the recording.

Dead and Company played two at Alpine Valley this year with the second show having one of the few guests that Dead & Co have invited to play with them. Just Vernon, primary songwriter and frontman of indie folk band Bon Iver joined Dead and Co near the end of their first set for the last three songs.

The reviews are in for Justin’s sit in and they are mixed. While a lot of fans panned the sit-in as the “worst sit-in,” there were fans who thought it was amazing. Someone went as far as updating Vernon’s wikipedia page citing this show as the worst in Dead & Co’s history. Ugh. 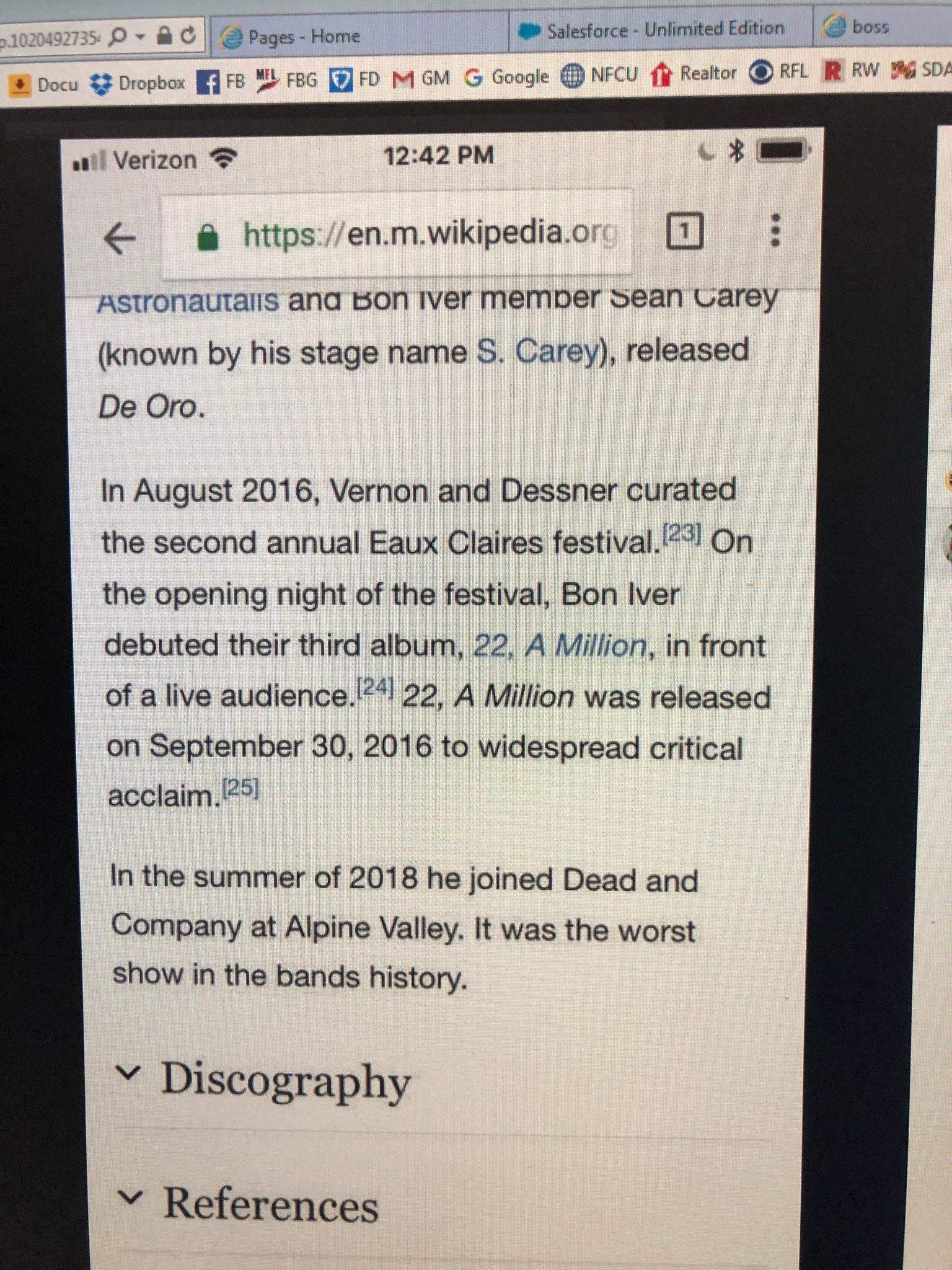 I personally find it difficult to question Mayer and Weir’s choice of guests and am willing to give the sit-in a few more listens to grow on me. I thought the “Black Muddy River” was actually quite beautiful. Give it a listen and decide for yourself.

The other setlist notation is from the second set “Sugar Magnolia” closer. After some equipment issues, Bobby and the microphone duked it out. Looks like Bobby won.

with Justin Vernon
! with Angry Bobby

Thanks to tyedyejon/taperjon for the recording.

Update: Thanks to Z-man for the full show AUD!

Dead and Company made their second Citi Field performance in as any nights. After a smokin’ night one, Mayer, Weir and the boys still had a couple of tricks up their sleeve for night two.

“The Eleven,” a vintage Grateful Dead tune from 1968, has been one of the most requested Dead songs since Dead and Company started touring four years ago. The musically challenging 50+ year old song, was finally debuted last night, warts and all for Citi Field.

Thanks to Sean Roche for the awesome footage!

Weir, Mayer and the rest of Dead and Co kept the setlist fresh with a couple more tour debuts. Some of the highlights include a smoking “Throwing Stones > Deal,” the tour debut of “Dear Prudence” and the “Greatest Story Ever Told.”

Thanks to Chris Davis for the recording.