The Grateful Dead have joined in on the fun and started a weekly stream on YouTube. The series, titled Shakedown Stream will share both your favorite concerts and never seen before footage of shows.

Last night, the series debuted with Truckin’ Up to Buffalo—the Dead’s much celebrated July 4th show from their 1989 tour. Sandwiched in-between shows in Foxboro and Philly, the Buffalo show was definitely one to remember—worthy of DVD, 2-CD and 5-LP box set releases.

Along side the livestream of the re-airing of the show, was a fundraiser for COVID-19 related charities. The stream raised over 20k in a single night—not too bad for the rebroadcast of a 30 year old show!

Thanks to the Grateful Dead for the stream!

Another Saturday night in quarantine and another installment of One More Saturday Night from Dead and Company. The 3rd show in the YouTube series is from summer 2018 at Dead & Co’s Eugene, OR tour stop.

Mayer leads the crew in a smokin’ “Deal” to kick the show off. The obligatory “One More Saturday Night” came early in the evening as the first set closer. In the second set, Bobby & Co treated Eugene to “Dark Star,” the elusive “The Eleven,” and a gorgeous “Morning Dew.”

Thanks to Dead and Company for the stream!

COVID-19, or known earlier at the coronavirus has changed life in America and around the world. Unfortunately one of the most likely places to spread the virus is in large gatherings, such as a concert. As a result, most if not all tours have been suspended for the next month or two.

Bob Weir and Wolf Bros’ landed in Chicago at the Chicago Theatre before the Coronavirus gripped the nation. The tour stop would be the last one before they postponed the rest of the tour to the fall.

The show included a bunch of Bobby favorites and some uncharacteristic Dead tunes in the second. Check out the banging “Shakedown Street” featuring some fine guitar work from Bob and the chilling “Morning Dew.”

Thanks to tyedyejon/taperjon for the recording.

Thanks to Bushidó for the recording!

Dead and Company returned for their second of two shows at the famed Madison Square Garden in NYC last night. After a rockin’ night one, Dead & Co delivered the goods again on night two.

Take a look at this setlist. Whoa! 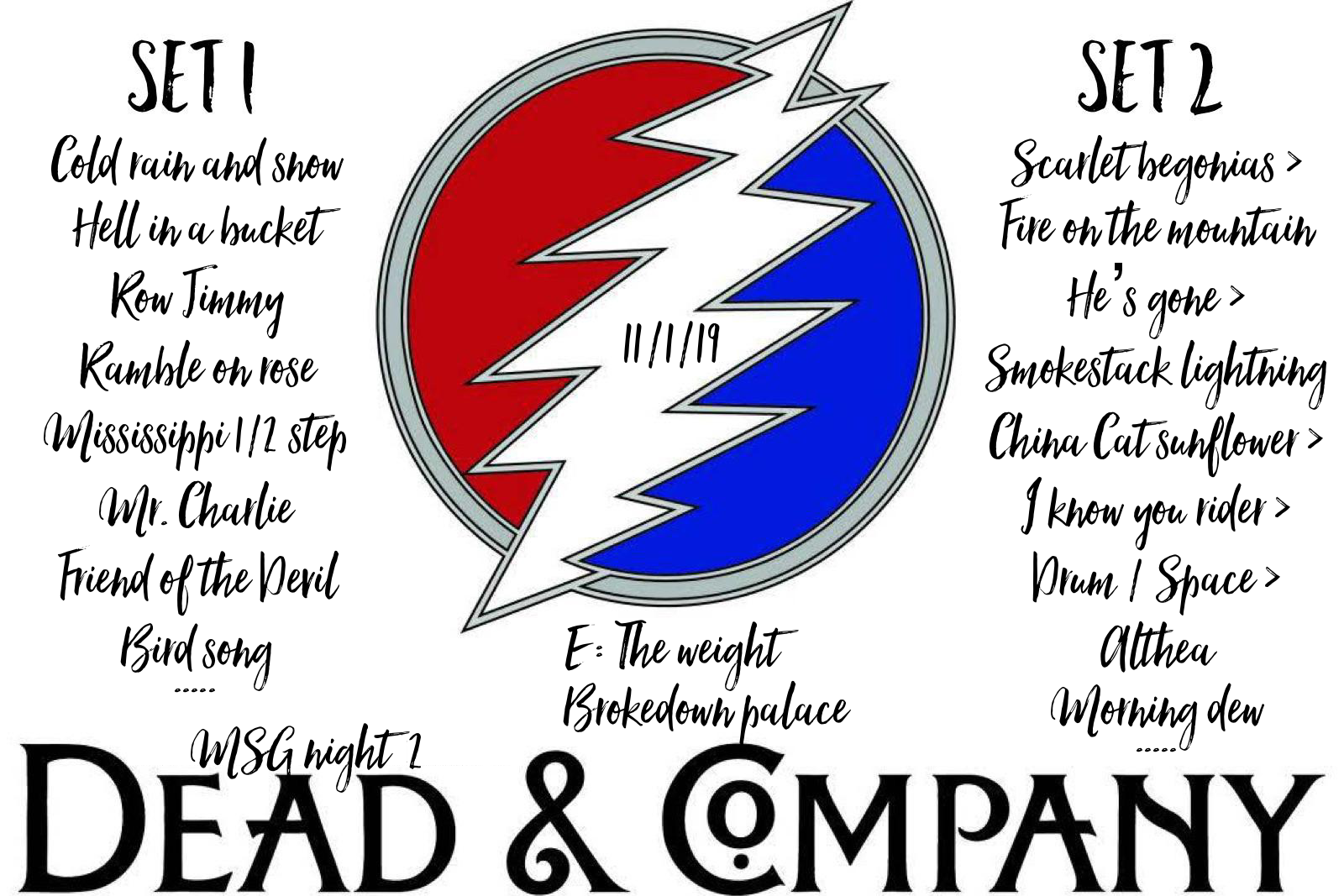 As you can see, the second set was straight fire. Anytime you kick off set two with a “Scar > Fire” you’re in good shape.

While there was a whole lot of good ol’ Dead last night, Dead and Company’s second night at MSG featured a rare guest—singer and songwriter Maggie Rogers. The 25 year old Maryland born singer joined in on “Friend of the Devil” in the first set and then returned for “The Weight” encore.

Scarlet Begonias > Fire on the Mountain


Thanks to Matt Frazier, Sean Roche and Dead and Company for the footage!

Phil Lesh, at 79 years young has opted to jam more with his family and friends in recent years. Last night, Phil reunited with friends new and old for a headlining two-set slot at The Peach Festival.

Phil’s and Phriends’ set included some choice covers including Cream’s “Sunshine of Your Love,” Bob Dylan’s “All Along the Watchtower,” Van Morrison’s “Into the Mystic” and Traffic’s “The Low Spark of High Heeled Boys.” The supergroup also jammed on a whole lot of Dead.

Set One:
01 Sunshine of Your Love
02 Broken Arrow
03 Just a Little Light
04 Bird Song
05 All Along the Watchtower
06 Viola Lee Blues
07 Into the Mystic

Thanks to Keith Litzenberger for the recording.