Oteil and Friends’ set was one of the most anticipated of LOCKN’ this year. The lineup that Oteil and Peter Shapiro assembled was simply mind-blowing.

Burbridge, who’s past is firmly rooted in the Allman Brothers Band and present is with Dead and Company, is one of a few musicians with expertise in both jam universes. Oteil drew on both of those influences for his set.

In addition to Allman Brothers Band and Grateful Dead tunes, Oteil and Friends performed originals, Jerry Garcia inspired covers and Janis Joplin’s “Piece of My Heart.” The highlight of the set for me was when Duane Betts emerged and took the wheel on “Dreams” and “Jessica.”

To top it off, Oteil celebrated his birthday on the same day as his set. Bob Weir and Peter Shapiro both made a point to commemorate the birthday with a happy birthday rendition and a custom made cake.

After LOCKN’, we all learned that this would be Neal Casal’s final show. Casal passed on August 26 at the all too young age of 50. His face-melting guitar work with Circles Around the Sun on night one of LOCKN’ will forever be one of my most cherished live music experiences.

Upon learning that Casal passed, Oteil posted this on Facebook:

“I just started to really get to know Neal and he was one of those people that I felt such genuine warmth from. My heart goes out to his family, friends and brothers of the road. This hurts so terribly much. I was looking forward to seeing that smile so many more times. Rest easy, Neal Casal.”

Thanks to Wiley Morris and Alex Leary for the recording! 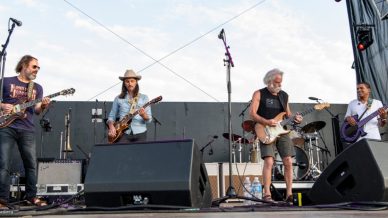