August is almost here and that means that another Wheels of Soul tour has come to a close. Tedeschi Trucks Band, Drive-By Truckers and the Marcus King Band made their last stop in Morrison, CO at Red Rocks Amphitheatre for their final two shows.

As with all the shows this summer, TTB invited up members from both Drive-By Truckers and the Marcus King Band for some killer covers. The first came about halfway through their set with Todd Smallie, former Derek Trucks bassist, on “Yield Not to Temptation > Turn on Your Love Light.” Marcus King and his crew were the next to come on stage. Check out his smokin’ sit-in on the set closing “In Memory of Elizabeth Reed.”

Thanks to Alex Leary for the recording! 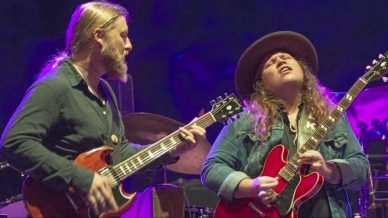 Jam Date: July 29, 2018
Featuring: Drive-by Truckers, Marcus King Band, Tedeschi Trucks Band, Todd Smallie
Venue: Red Rocks Amphitheatre
Songs: All That I Need, Bound For Glory, Down in the Flood, Get What You Deserve, I Want More, In Memory of Elizabeth Reed, Laugh About It, Little Martha, Lord Protect My Child, Midnight in Harlem, Night Time is the Right Time, Part of Me, Rockin' in the Free World, Show Me, Stateboro Blues, Turn On Your Love Light, Yield Not To Temptation
Hey-I got something to say!