Tedeschi Trucks Band is the thick of their annual Beacon Theater residency. TTB has had a standout year, producing a massive four-piece album project entitled I Am The Moon and toured extensively this summer with their annual Wheels of Soul tour.

On their third night at the Beacon, TTB didn’t merely play a few songs from their new project, but rather played the second act in its entirety.

Set One: Playing With My Emotions^, Ain’t That Something^, All The Love^, So Long Savior^, Rainy Day^, La Di Da^, Hold That Line^, Loving You Is Sweeter Than Ever (The Four Tops), Whiskey Legs

Set Two: Down In The Flood (Bob Dylan), Hard Case, Why Does Love Got To Be So Sad? (Derek and the Dominos), Smoke Ring Halo (The Wood Brothers), How Blue Can You Get? (Jack Clement), Anyhow, The Letter (The Box Tops), Midnight In Harlem*, Key To The Highway (Charles Segar), Bound For Glory

^Part of complete performance of I Am The Moon II: Ascension

Thanks to Ed Tyre for the recording! 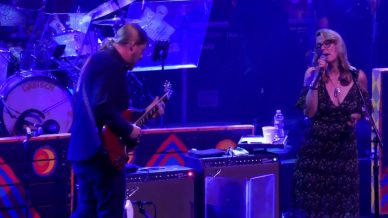 Jam Date: October 1, 2022
Featuring: Tedeschi Trucks Band
Venue: Beacon Theater
Songs: Ain't That Something, All The Love, Anyhow, Bound For Glory, Down in the Flood, Hard Case, Hold That Line, How Blue Can You Get, La Di Da, Loving You Is Sweeter Than Ever, Midnight in Harlem, Playing With My Emotions, Rainy Day, Smoke Ring Halo, So Long Savior, Tell the Truth, The Key to the Highway, The Letter, Whiskey Legs, Why Does Love Got To Be So Sad
Hey-I got something to say!