The long awaited return of Tedeschi Trucks Band to the Beacon Theater for their annual autumn run has come to an end. Last night, TTB with the help of a couple of friends and opening act, The Greyhounds. The TTB Beacon run carries on the long-standing tradition that Derek Trucks was a part of for so many years—the spring Allman Brothers Band run at the Beacon.

As with Beacon run’s in the past, TTB welcomed two very special guests to the stage last night. First up was Carey Frank, who had subbed in all summer for Kofi Burbridge. Kofi has regained his health and strength and is now back with the band. Frank sat in for the tune “Chevrolet” early on in the show.

The second special guest came out towards the end of the set. Jazz keyboardist, John Medeski sat in for the last four songs of the set, totaling nearly 40 minutes of stage time. The song’s included TTB concert staples like “Get Out of My Life Woman,” “Let Me Get By” and “Will the Circle Be Unbroken.” TTB and Medeski also teamed up for “Hudson,” which was written by Medeski and John Scofield.

Encore
Down Along The Cove
Made Up Mind

Thanks to edtyre for the fantastic recording. 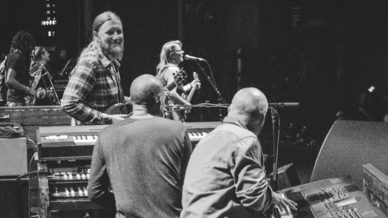 Jam Date: October 6, 2017
Featuring: Tedeschi Trucks Band
Venue: Beacon Theater
Songs: All The World, Anyday, Chevrolet, Dont Know What It Means, Down Along the Cove, Get Of My Life Women, Hudson, I Pitty the Fool, I Wish I Knew, Idle Wind, Laugh About It, Let Me Get By, Made Up Mind, Right On Time, Shame, Sweet Mama Janisse, Will the Circle Be Unbroken
Hey-I got something to say!