Bob Weir continued his Campfire tour with a stop in New Orleans. The show featured the same format as it has in the past with Bobby opening up the show solo on the acoustic guitar. What was different about the NOLA show was his song selection. Instead of opening with a couple of ballads or Dylan tunes, Bob got the Saenger Theatre rocking right from the opening “Walking Blues.” Bob didn’t wait to drop the funk on New Orleans either and busted out an acoustic version of “The Music Never Stopped.”

For the second set, Bobby and gang played one hell of a setlist including “Me and Bobby McGee,” “Friend of the Devil” and a “China Cat Sunflower > I Know You Rider” to finish out the set. The real treat came when NOLA native and founding member of The Meters joined Bob and the Campfire band on stage for “Sugaree” and “Birdsong.” Porter Jr. last joined Bobby on stage at the Christmas Jam last December for a killer “Sugaree” as well.

Thanks to nolamule for the excellent recording. 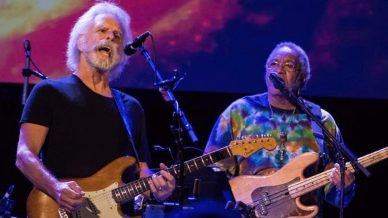