By the time Led Zeppelin embarked on their second tour of the US and Canada in August and September of 1970, the quartet had all but taken their place at the top of the heap among the slew of rock and roll legends criss-crossing the globe at the time. With two groundbreaking studio albums, and a third on the way, Jimmy Page, Robert Plant, John Bonham and John Paul Jones were undoubtedly a force to be reckoned with. While both tours are littered with highlights, the west coast dates that kicked off the second month of the tour in the first week of September are among some of the band’s most legendary, with perhaps the best coming during the band’s second stop of the year at the legendary LA Forum.

The site of many memorable performances in it’s time hosting concerts, Zeppelin’s thunderous two-plus hour epic on September 4, 1970 is a testament to the British foursome’s greatness.

Beginning the night with the screams of “Immigrant Song,” the first of three songs from the band’s yet-to-be released third album, the pedal was firmly on the floor. A blistering “Dazed And Confused” capped off a trio of songs from each of their albums, complete with extended violin bow soloing by Page. The sonic journey ebbed and and flowed throughout the two hour affair – from a rousing crowd participation exercise to begin “Bring It On Home,” to the hushing of the capacity audience for a mini acoustic set, highlighted Jimmy Page’s magnificent solo acoustic piece, “Bron-Yr-Aur,” a song that wouldn’t be released on an album till 1975’s Physical Graffiti.

While each band member was given his time in the spotlight throughout the night, the crown jewel of the evening is perhaps the roaring 17-minute rendition of “Whole Lotta Love” that closed out the scheduled portion of the evening. From the unbridled swagger of the trademark song’s opening notes, the mighty Zeppelin thunder through the songs opening verses, complete with a trippy theremin soaked breakdown, before launching into a medley of old blues songs. With jaw-dropping synergy, Page and Plant lead the band through a medley featuring songs by John Lee Hooker, Buddy Holly, Buddy Guy and others, before roaring back into their own song nearly six minutes later, bringing the brilliant show of musical dexterity to completion, to the delight of the packed crowd.

Encore:
18 – Communication Breakdown (Medley of the following)
19 – Good Times Bad Times
20 – For What It’s Worth (Buffalo Springfield cover)
21 – I Saw Her Standing There (The Beatles cover)

Listen to the whole night, courtesy of Led Zeppelin Archives on YouTube.

The Jam Buzz guest author for this week is Ross Mickel. Ross, aka ‘The Bootlegger’ is the producer and host of Bootleggers Beware, a weekly live music radio show airing from 10AM-1PM EST on The Radiator, 105.9FM in Burlington, VT, and a live music enthusiast, curating a collection of over 2500 recordings. Check out his website and on Facebook. 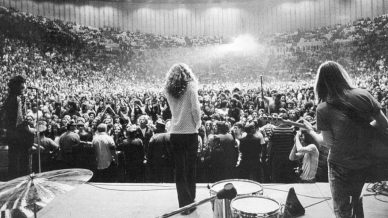 Jam Date: September 4, 1970
Featuring: Led Zeppelin
Venue: LA Forum
Songs: Blueberry Hill, Bring It On Home, Bron-Yr-Aur, Communication Breakdown, Dazed And Confused, For What It's Worth, Good Times Bad Times, Heartbreaker, I Saw Her Standing There, Immigrant Song, Moby Dick, Out On The Tiles, Since I've Been Loving You, Some Other Guy, Thank You, The Lemon Song, Think It Over, What Is And What Should Never Be, Whole Lotta Love
Hey-I got something to say!