Jerry Garcia played his final show on April 23, 1995 at the Warfield Theater. Jerry went on to tour with the Dead that summer before he passed away in August.

Listen to Melvin Seals and JGB pay tribute to Gloria Jones at the Warfield.

While even the most fervent Garcia fans will admit 1995 was not his best year, Jerry flashes passages of brilliance. Over two sets, Jerry and his band treated the Warfield to 13 songs that amounted to a classic JGB show. From old favorites like “How Sweet It Is” to originals like “Deal,” this is by all accounts a solid show.

While recordings of the the show exist, this particular audience recording by Troy Wallwork is fresh and new to circulation. While other recordings may have errors and flaws, this recording is about as good as we’re going to get.

Thanks to Troy Wallwork for the recording! 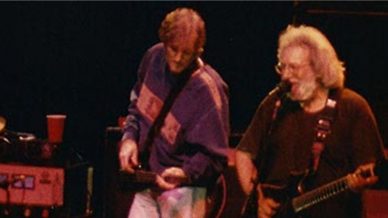 Jam Date: April 23, 1995
Featuring: Jerry Garcia Band
Venue: Warfield
Songs: Deal, How Sweet It Is, Midnight Moonlight, My Sisters and Brothers, Reuben and Cherise, Run for the Roses, Simple Twist of Fate, Stop That Train, Struggling Man, The Night They Drove Old Dixie Down, Think, You Never Can Tell
Hey-I got something to say!