Gov’t Mule filled in for Gregg Allman who had to cancel his appearance at the Peach Festival due to illness. The Mule did not disappoint. In addition to a fantastic set, they welcomed Blackberry Smoke and Oteil Burbridge out for a special Allman Brothers extended encore.

They opened the set in with the Mule classics “Mule”, “Thorazine Shuffle”, and “Game Face.” Another highlight from the set was Rich Robinson from the Black Crowes joining for a cover of “Sometimes Salvation.”

The marquee event though, was the Allman Brothers themed extended encore. Gov’t Mule has played some pretty epic encores this past week including “Cortez the Killer” and “Southern Man – Simple Man.”

The stream above starts at the encore. Play it from the beginning to enjoy the whole show!

Thanks to tgakidis for the stream. 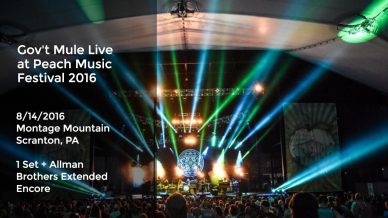