Thanks to Alex Leary for the excellent recording.

An all-star line-up that has performed at Jazz Fest late-night gigs over the last couple of years, has embarked on their first tour. It’s a small one, but here’s hoping that we see a lot more Voodoo Dead in our future.

Voodoo Dead’s formidable line-up includes Steve Kimock, Jackie Greene and Papa Mali on guitar, Oteil Burbridge on bass, Jeff Chimenti on keyboards and Wally Ingram on drums. The supergroup’s focus is playing the music of the Grateful Dead (along with some other tunes) in more jazzy, NOLA style.

The first of the five shows that Voodoo Dead announced was at The Hamilton in Washington D.C. After a brassy and funky opening set from the Empire Strikes Bass, Voodoo Dead treated D.C. to two hours of extended, loose and jazzy tunes. The set only includes 8 songs, but when you have three guitarists on stage, you have a lot of jamming.

Thanks again to Tom Libera for the awesome front-row footage and sharing it!

Encore
I Shall Be Released 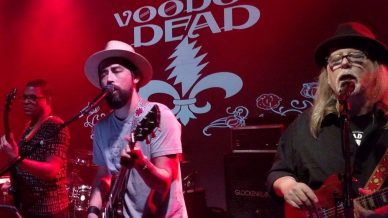